In collaboration with mobile game giant, King, a subsidiary Activision Blizzard, Nathan Love helped reintroduce the cast of Candy Crush Saga as beautifully rendered, film-quality characters to promote the latest iteration of their hit video game.  The studio then produced a :90 second animated trailer to launch the release, and created the in-game intro video seen by every player.

The new characters will be widely featured in promotional material, in-game and more! 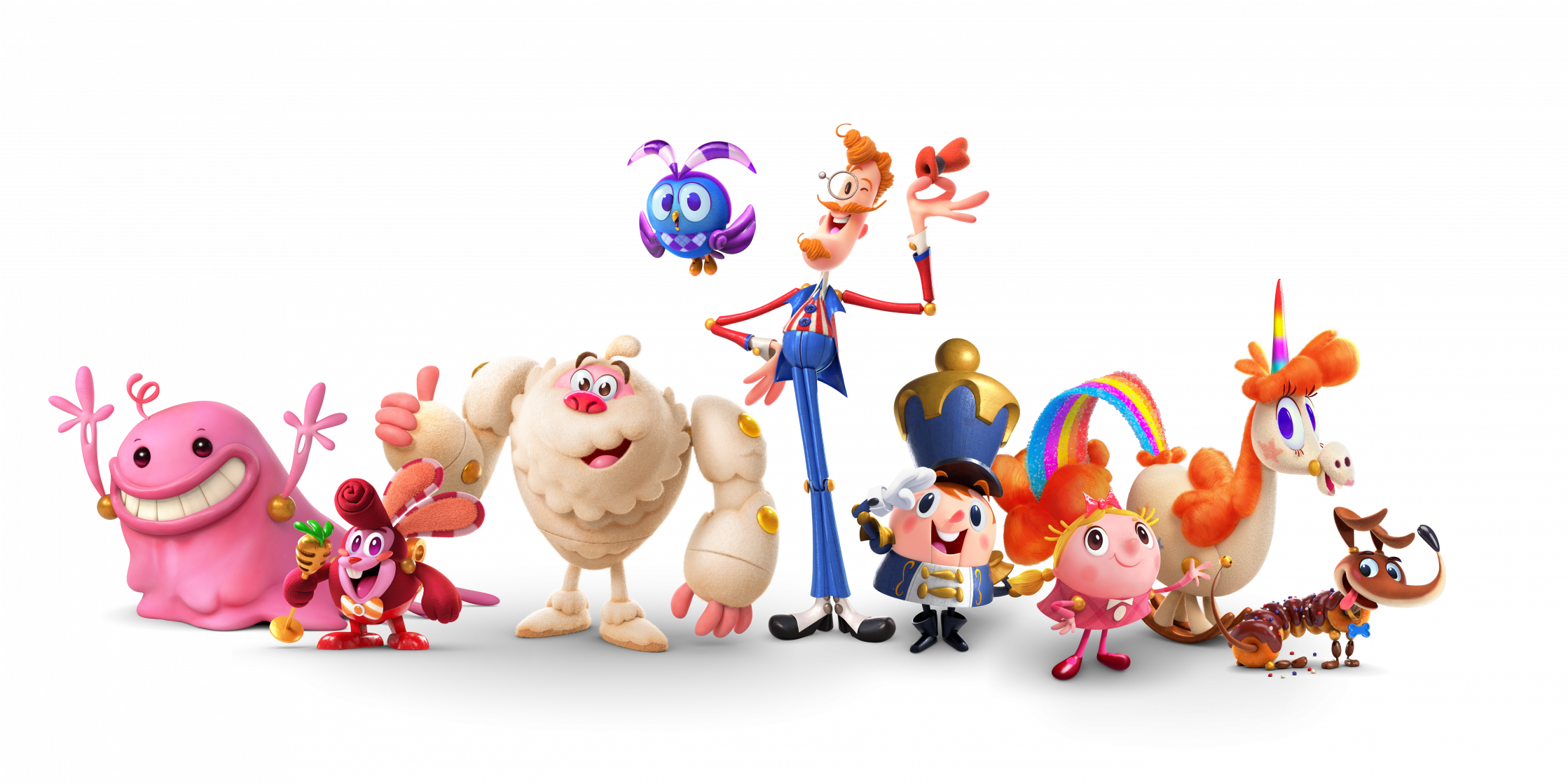 Developing the appealing cast of characters for a brand as well-known as Candy Crush involved the oversight of several stakeholders within the game’s organization.

The process was a true collaboration, with initial design direction coming from the games team at King, followed by oversight from the brand’s marketing division, as well as their in-house creative agency.

By the end of the project’s first phase, Nathan Love created over 100 unique, billboard-quality images for use in all all of the games branding and outreach efforts.

The stills were created to hold up across all media, including large scale print.

Because of the unique demands of the project, Nathan Love designed a two-stage process for building the characters. The assets were first modeled and textured for still renders, and then further developed into feature quality animation-ready characters.

We began by modeling the basic shapes of the character, making sure that the proportions both looked and felt true to the original design.  Once the silhouettes were correct, we added the details and props like the frosting, sprinkles and collar. Next was the texturing process where we applied the perfect surface materials.  Finally came the lighting, rendering and compositing of the renders to produce that delicious final look.

The most iconic part of Candy Crush is the candy itself. The brand team entrusted Nathan Love with recreating their entire catalog of sweets at high resolution with an updated look.

Because the game uses actual confectionary products, we were especially careful to treat each element with care and accuracy. The taste appeal of the candy was a crucial element: we focused on getting those sweet, drool-worthy details just right to make your mouth water!

With a full cast of approved characters, ANL’s next step with King was to develop a launch trailer for the game. The video introduces the fresh new look of our characters, and showcases the new features of the gameplay, demonstrating the game’s special moves with a big dose of exciting special effects.

The addition of a 3D map in the game gave us an opportunity to create a whole world for the characters to play in.

Beginning with an approved sequence of storyboards from the client, Nathan Love jumped into animation with the new characters and landscape.

Knowing that our work would be seen on a variety of platforms, we started the process by using a unique layout that ensured our scenes would work with any crop between 16 x 9 and 9 x 16.  When it came to our worldwide delivery in a multitude of languages, that initial plan made the process DIVINE.

Once the trailer was complete, Nathan Love focused efforts on the last item required for launch: the in-game Intro Animation. Using the same world as the trailer, the animation introduces each character and is optimized for use on the mobile platform.

It was an amazing experience being at the center of a huge game release and the teams at King have been extraordinary creative partners.  They transport players into rich worlds and stories with their games the way that we do with our original characters and animated storytelling.  It has been a deliciously successful collaboration and we hope that the fans are having a blast playing the game. We are!